The European turbulence conference gathers every two years the community of scientists involved in the study of turbulence, from fundamental physics issues to applied fluid mechanics – usually over 450 participants. Eight outstanding contributors are the central invited speakers, and 5 sessions are run in parallel.

The first ETC meeting took place in 1986 at the Ecole Centrale, in Lyon. For the 14th edition and 25th anniversary of this very successful event, the Euromech Committee has again selected Lyon.

How to get there

The conference will be held at the Scientific Campus of the Ecole Normale Supérieure de Lyon (site Monod), which is situated in the Gerland area of the 7th district of Lyon, near the Pont Pasteur bridge on the left bank of the Rhône. Warning: not to be confused with the Literary Campus of ENS, located a few blocks away.

The Conference will take place at the scientific campus:

Map to reach the Conference venue from the nearest metro station (Stade de Gerland, line B) 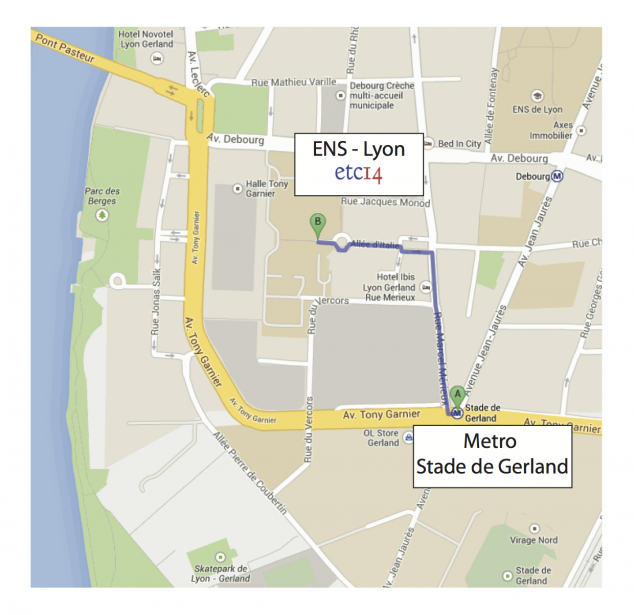 Take the Rhônexpress tram to the Part-Dieu railway station, then change to the metro, take a train for Direction Stade de Gerland until the terminus (Stade de Gerland).

From the Part-Dieu railway station:

From the Jean Macé metro and suburban train stations:

From the Perrache railway station: